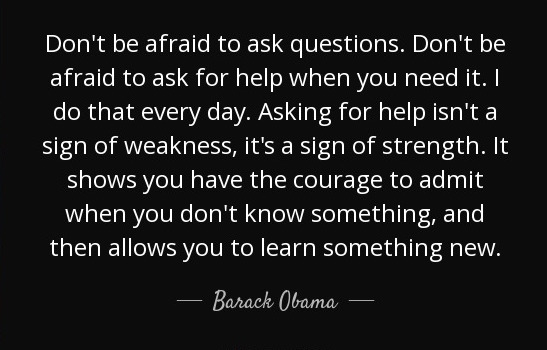 Asking for help is something that I haven’t always been comfortable doing. In my first few weeks as a server, my managers would often ask if I needed anything and I would always tell them, “No thanks, I’ve got this” … and I mean always. It didn’t matter how busy I was or how long the list was of things that I needed to do, I would never accept the help. There were three reasons that caused me to shy away from accepting or asking for help, and I’m sure I’m not the only one:

Once I started at Plan A I would never ask for help either, even when I felt overwhelmed. Shortly after starting with Plan A, I knew that I wouldn’t get very far in completing my tasks if I refused to accept help when it was offered or if I shied away from asking for help when I truly needed it.

Since then, I’ve become quite comfortable with asking for help. If I need something done right away for one of my tables or if I need a second set of eyes to read over an email before I send it out, I never shy away from asking someone who appears to have a bit of time if they wouldn’t mind helping me out. One thing that I’ve come to realize with time is the following: If someone is offering to help, it’s because they genuinely want to help. Keep in mind that everyone is living their own busy life, so if they’re offering their help, don’t feel bad about accepting it; very rarely will someone offer you their help if they don’t want to or if they don’t have the time to follow through with it!

Like I said, I haven’t always been good at asking for help or requesting a favour; it’s come with time and practice. What I’ve realized is that I would follow the same three steps every time I found myself in a position where I needed to ask for help:

What if they say no? The response that everyone dreads. That possibility is one of the main reasons that we have so much trouble asking for help, right? It is for me anyways. One thing I’ve gotten used to is the possibility that some of the individuals that I approach for help are going to be too busy to take on the task or maybe they just don’t want to do it. Rather than taking it personally, which can sometimes be difficult, simply thank them for their time and either seek out another individual to ask for help or find a way to make the time to complete the task on your own!